To Jülich, most flattened yet. Heaps of new rubble, bulldozers pushing out roads, floods in ruins. Bridges on pontoons thrown over with difficulty, one for tanks, one plank bridge on floats for walking. Walked on and on towards Citadel. Saw flame throwing and followed on. Orange flares and black towers of smoke. W running and taking cover beside tank in shell hole, also Colonel. Sniper said to be about, much discussion. Walked over myself; can’t run and duck. Followed up after tanks, not liking to lose sight of W & R. Soldiers too busy with attack to pay attention. Crouching Colonel behind tank. Drew pictures. Under tunnel gateway of Citadel, waited with soldiers. 3 rockets came over. Ventured in. 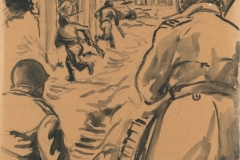 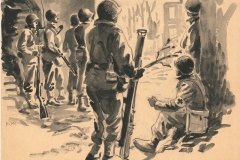 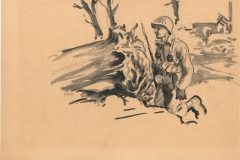 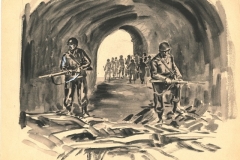 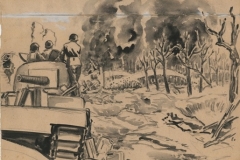