Armed only sketchbook and paintbox, Barbara Loxton drew action in the combat zones of the European Theatre of Operations, and after the German surrender in May 1945,  in the German occupied countries of Holland and Czechoslovakia and in the apocalyptic devastation of Germany itself.

Barbara was an artist, not a journalist;an anomaly in the company of war correspondents.  She became, by chance, an entirely accidental and freelance war correspondent, who turned out to be the only South African reporting from the northern sector of the Push Across the Rhine, and continued from there, with no official status at all, across Germany to Berlin.

After the D Day landings in June 1944, it was assumed the war was almost over, and she was able to accompany her ailing and pregnant sister on the ship from South Africa to England. When they landed at Liverpool on the 13th of August 1944, and entrained for London. V1 rockets were raining down on England. The war was by no means over and civilian shipping had ceased. Barbara, at 38, a wife and mother, was stranded, unable to return to her 2 small daughters in Cape Town. But she had many resources. She had trained at the Chelsea Art School in London as an illustrator, and had many friends and relations in England. One, Martli Malherbe, worked in the Africa Service of the BBC, which opened  an opportunity. Once commissioned,  in November 1944, to make broadcasts from Europe on the Africa Service of the BBC, she gained accreditation as a War Correspondent,  enabling her to apply to SHAEF, The Supreme Headquarters of the Allied Expeditionary Force, for permission to travel with the Armies in Europe.  After May 1945, and without  attachment to a newspaper, she reverted to civilian status, but continued, under the kindly blind eye of friends in the US and British Armies and Press colleagues, to travel under the aegis of the Allied Military  as a freelance, writing and illustrating, and broadcasting  on the Africa Service of the BBC and, on her return in December 1945, on the SABC

She drew in the Casualty Clearing Stations and on the battlefield itself. She drew the aftermath of the collapse in Germany and in the Russian sector of Berlin.There are  comic accounts of danger and exhilaration and personal stories of the people she met.  Her mother’s eye was particularly alert to  the plight of women and children: children of Holland’s neat villages, running around among the tanks as they rolled into battle,  exhausted mothers and children tramping the roads of Germany, homeless and hungry, living in the ruins of buildings. Barbara’s eloquent drawings are supported in vivid detail by letters, notebooks and diaries, recording names, places and incidents. The excitement of Victory faded away at the heartbreak, the hopeless destruction, the starvation, the cruelty she witnessed. There grew in her a determination to stand up to the powerful and support the powerless in her own country, which continued to her death in 1968.  Her archive consists of 179 drawings, 3 notebooks, 93 letters, broadcast scripts and articles.

In person, Barbara was small and slight, with an observant eye, an appreciation of the absurd and a great enjoyment of life. Her unassuming charm and intense interest in people, accorded her advantages not enjoyed by many official correspondents. Travel was controlled by Supreme Head Quarters Allied Expeditionary Force. Strict limits were laid down and conducting officers allotted, but some of these officers became Barbara’s champions and allowed her to strike out on her own. The British Army, during the Battle in the Reichswald, allotted her a private jeep, a driver and the complete freedom of the Reichswald battle field – a right never accorded to any other correspondent. 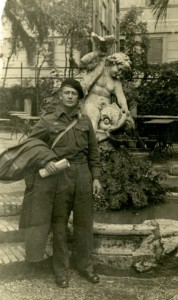 Barbara Clark, born 21st October 1906 in Cape Town, South Africa, trained from 1925 -1929 at the Chelsea Polytechnic Art School in London. She returned to South Africa in 1930, married Allen Loxton and had 2 daughters. She worked as an illustrator of books and magazine articles and as an art teacher in schools and technical colleges till she left for England on 16th July 1944. Her journalist husband Allen, had joined the volunteer South African Army in 1939, serving in the North African Campaign and in Italy with the 8th Army, but it was Barbara, who by pure chance, became the war correspondent..