Sunday 15th July
Berlin is very strange. Littered still, wrecked and burnt out cars in the streets, also guns and shot up tanks. Food queues of course and immense bus queues. Limited underground service going only a little way under the earth. Russians in wagons with horses and foals. Russian flag on Reichstag. Bartering on the steps, thick crowds of Russians, Germans, some Americans. Germans offer clothes, shoes, jewellery, books, etc. Seem to get on amicably with Russians, but roughly treated. Tales of rape quite accurate. Girls taken into cellars, made to undress. Brick and bucket parties, women in long lines winding up into the ruins pass along buckets of rubble. Complain that they don’t get promised 75 pfennig per hour. 5 hours daily if they have no regular work – Labour Bureau. 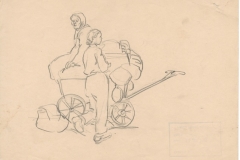 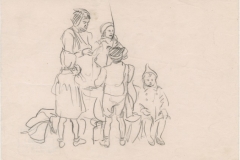 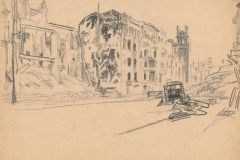 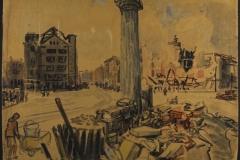 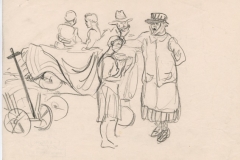 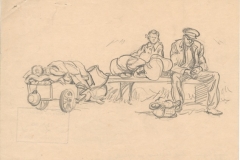 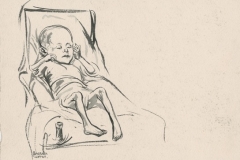 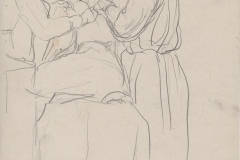 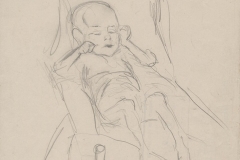 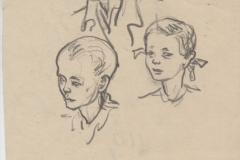 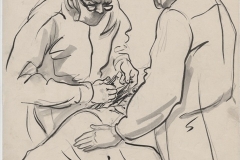 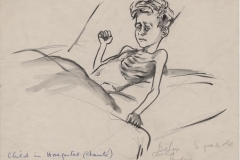 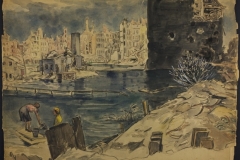 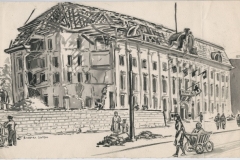 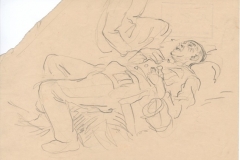 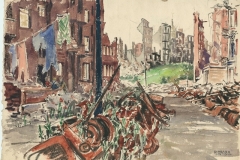 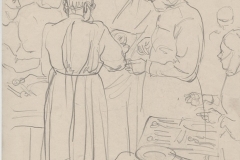 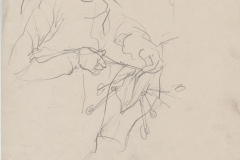 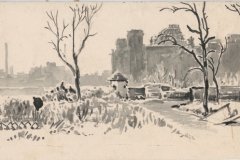 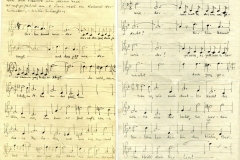 The red flag looking v. small, flies on the open dome rafters of the Reichstag; only 1/2 dome. Black market round the Reichstag getting v. bad. Military action taken against it & arrests made. Kommandantur action. In the streets constantly accosted by Germans offering objects for cigarettes or chocolate or offering to buy cigarettes. Humiliating. No pride at all. Quite blatantly abject. Pitiful. Yanks and Russians barter. (Yank filled cig carton with a block of wood & gave to Russian in exchange & walked away. R investigated, pulled a gun & in ensuing fracas American Major shot dead. Asking for trouble.

My interest and concern led me to go to civilian hospitals, and I visited the Charité and met the famous lung surgeon, Professor Sauerbruch, who fears neither Nazis nor Russians and, of course not the British or Americans. I watched him operate – 4 major ones – and learnt a great deal about the heartbreaking conditions in hospitals and amongst the people. I’ve written an illustrated article, but had to be very careful, as I realised only after I had already been there, that the Russians do not permit you to visit hospitals in their area! It is all very tricky. Personally I enjoy the Russians, but they are hard and strange, rough and destructive, and the people have good reason to fear them.