Battle of the Bulge

This surprise German offensive in the Ardennes on the night of the 15th December, caught the Allies totally unprepared. The attack punched a ” bulge” through the American lines and the campaign, fought during the bitterly cold winter months, was the largest and bloodiest battle fought by the Americans, and it exhausted the German reserves of manpower.

“Burnt out and disabled tanks, American and German, are scattered widespread, trees crashed off by gunfire, houses shot to pieces. German dead still lie on the snowy fields and in the ditches, and in one tragic field buried under snow except for a hand and foot here and there, are about 150 American prisoners, machine-gunned. We went to St Vith which looks as if an earthquake had hit it, where we stopped and I made sketches of the famous Airborne, who were most enthusiastic. There was a penetrating sweet smell of death in the air and a whistle of shells overhead which I did not realise at the time were German, not ours. I have strange souvenirs from there for the children, including the Airborne shoulder badges which the troops tore from their sleeves for me”. An Army Newsreel photographer came with us especially to make a film of me sketching out there in the ice and snow, the paints and brush both frozen so that the resulting picture is odd to put it mildly,with the guns blazing away and the dirty bearded men looking on.” 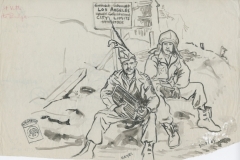 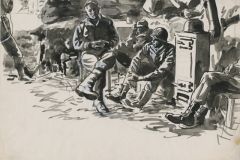 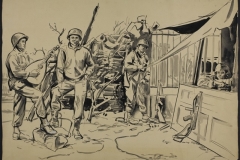 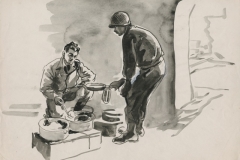 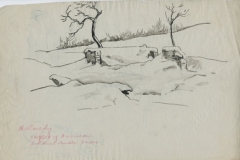 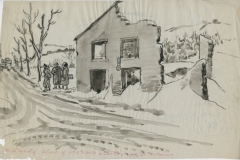 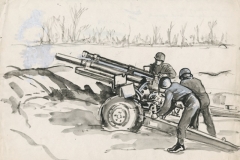 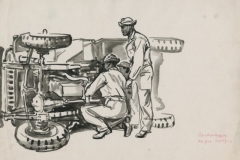 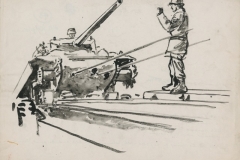 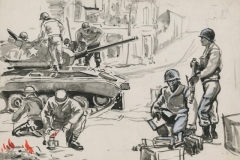 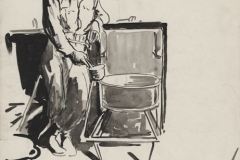 MALMEDY MASSACRE 17th December 1945
Kampfgruppe Peiper captured a group of lightly armed Americans. They were disarmed and, with some other Americans captured earlier (approximately 150 men), sent to stand in a field near the crossroads under light guard. About fifteen minutes after Peiper’s advance guard passed through, the main body under the command of SS Sturmbannführer Werner Pötschke arrived. Accounts of the killing vary, but 84 of the POWs were murdered. A few survived, and news of the killings of prisoners of war raced through Allied lines.